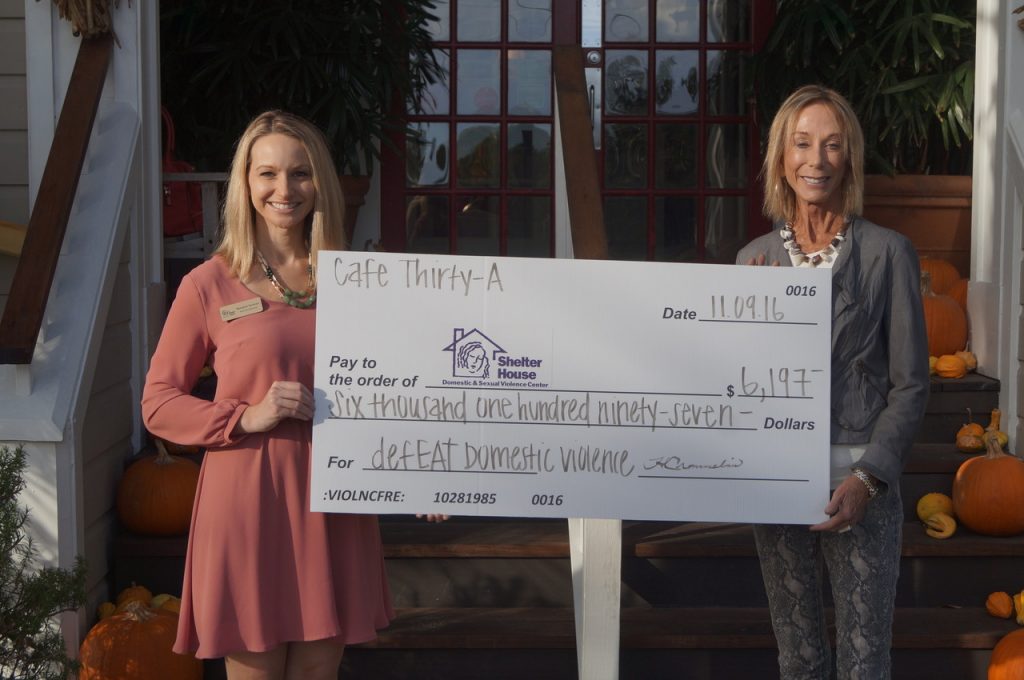 The defEAT Domestic Violence campaign brought in more than $13,000 that will go toward lifesaving services for domestic violence victims.

Four of the restaurants – La Paz Restaurante & Cantina in Destin, Island Wing Company in Destin, Café Thirty A in Seagrove Beach and Redd’s Fueling Station in Santa Rosa Beach – chose to give a percentage of sales from the same weekday all month long. Café Thirty A donated 15% of sales from Wednesdays in October which amounted to $6,197 for Shelter House.

“Café Thirty A takes pride in being a good neighbor by supporting those in need in our community,” said café owner Harriet Crommelin. “We chose to help Shelter House because we believe in the great work they do for our community and their message. We will continue to step up and help out because we value our commitment to assist others.”

The Other End Restaurant & Beergarden in Destin held a one-night only event early in the month where everyone enjoyed live music, a silent auction and food and drink specials. At the end of the evening, Shelter House was presented with a check for $7,500 from the Bill and Dianne Campbell Community Charitable Trust.

Rounding out the campaign was Pizza by the Sea. The popular South Walton eatery donated a portion of sales on one day from all three of its locations.

“We are ecstatic to see the response from the restaurants and the community for this first-time event,” said Shelter House Executive Director Rosalyn Iovieno. “So much of the work Shelter House does is confidential. The defEAT Domestic Violence campaign gave us a wonderful opportunity to bring this issue to the public and let everyone know what we do and where survivors can find help.”